La Torre di Castel Rocchero is nestled in the soft hills of the Astisan Langa.
A few kilometers away is Acqui Terme (the name comes from the Latin “Acquae Statiellae”), a charming spa town known since Roman times for the therapeutic properties of its steaming waters.
Not only a Roman city, Acqui Terme has a medieval aspect, with charming narrow streets and cobbled alleyways reminiscent of the Genoese “carrugi”, framed by Renaissance and Baroque portals. 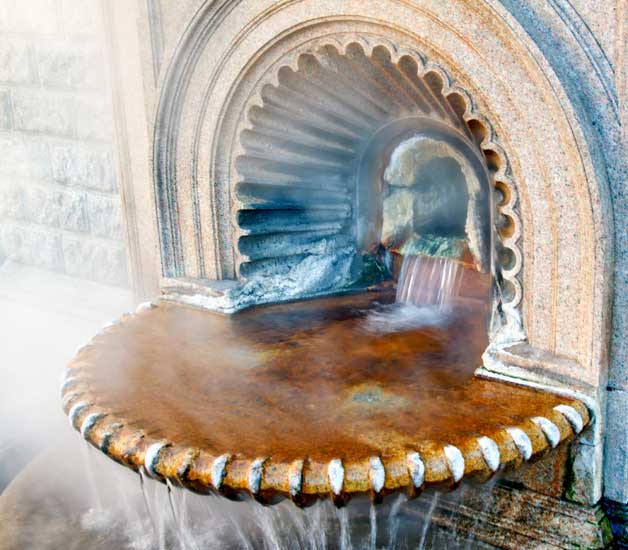 Do not miss, as well as a stop at the spa, a visit to the central Italia square with the Fountain of Lilies in Viganò boulevard, the steps of Schiavia, the Piazza Duomo with the bishop’s palace of the fifteenth century, the Cathedral of San Guido with the Triptych of Our Lady of Montserrat, exposed in the Chapter Hall of Canons, the Paleologi Castle which houses the Archaeological Museum and the Botanical Garden “Birdgarden”.

Another must is the square of “La Bollente” (The Boiling), with a source of hot water at 75 ° symbolizing the thermal heritage of the city.
From here you get to Piazza San Francesco, with the nineteenth-century Fountain of the Castle and the Convent Church of St. Francis of the fifteenth century rebuilt in the mid-nineteenth century.
The Town Hall, the ancient home of the Earls of Lupi from Moirano, is located in the adjacent square Abraham Levi.
Still from Italy square, towards Corso Bagni, under the arcades on the right you can visit the ancient Roman pool: ruins of a thermal complex dating back to the imperial age, and a bit beyond the remains of the Roman aqueduct of the Augustan age.

The tormented Cesare Pavese, the partisan Beppe Fenoglio, the ironic Giovanni Arpino, the versatile Davide Lajolo, the intellectual Augusto Monti, the passionate Vittorio Alfieri: many are the famous writers born in this piece of land that stretches between Bra and Vinchio, Acqui Terme and Asti, Alba, Castelnuovo Calcea, Murazzano.
The “Landscape and Literary Park Langhe Monferrato and Roero”, through the life and works of some great authors of the Lower Piedmont, offers visitors an original reading of the landscape and the local cultural identity.

Unreleased cues for walking the hills of Monferrato can be found in the book of the naturalist Franco Correggia “Paths of hill between Monferrato and Astisan Langa. Nature and cultural walks”.
A book that takes the reader to discover some fragments of the province of Asti green hills, valleys, forests, meadows, ponds, springs, streams, trails, vineyards, farms, country chapels and castles.
Technical sheets, topographic maps, gradients, walking times and a rich set of thematic studies to learn about nature and culture of this wonderful hilly territory: environments, ecosystems, biodiversity, flora, fauna, Geopaleontology, climate, landscape, history, architecture, art , material culture, memory and local traditions.

Even those seeking luxury and fascinating stories of villas and castles will not be disappointed by the area around La Torre di Castel Rocchero: particularly worth visiting are the Castle of Costigliole d’Asti, the Cremolino Castle and Villa Ottolenghi in Acqui Terme with its Gardens.