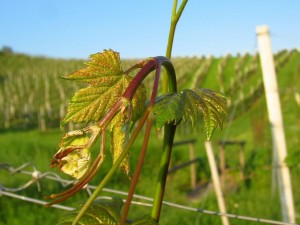 Between March and April, with the arrival of spring, in the vineyard we witness the  vegetative revival of the vine entering the phase named “the weeping” and then the one of   “budding”.  The “weeping” is a typical phenomenon of the vine consisting in the emission of lymph from   the cuts done for pruning. It is caused by the reactivation of sugar metabolism and by the   high level of absorption of the roots during this time of year.  Since the beginning of April, start to appear the first sketches of what will become the future   shoots giving origin to the grape.  The buds are made of four or six leaves and measure about 10 cm.  In the following weeks they become more identifiable and well separated.   In the same period occurs a rapid elongation of the new shoots.